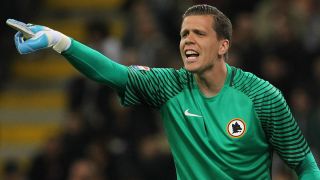 Wojciech Szczesny believes leaving Arsenal for Roma was the best thing that could have happened to him and reveals life at the Emirates Stadium was becoming negative before his departure.

The goalkeeper has spent two years on loan at Roma and faces an uncertain future, with only one year left on his contract with the Gunners.

Szczesny feels he has never been a better player due to his spell in Serie A and is glad he left Arsenal despite initially finding his departure tough to take after they brought in Petr Cech from Chelsea.

"The season before I left I had a very bad season – performances, injuries, off field – it was terrible," Szczesny said to the Guardian.

"I could have stayed in an environment that was going negatively for me. Instead the opportunity that came gave me a fresh start. You get a new perspective. You get new coaches and influences. You learn new drills. You do new things.

"Now I am very happy that it happened, even if the first impression was that I might be out of Arsenal, which was very painful. Now I think it was probably the best thing that could have happened to me.

"The biggest thing I have taken away from these two years at Roma is the fact I grew as a goalkeeper. It is just raising your levels, your standards. I absorbed a bigger knowledge of football, the tactical side of the game. You don't see me with that rush of blood that I used to have as a younger keeper.

"I think I can be better now than I thought I could be when I was back at Arsenal. I have grown more than I would have hoped for.

"The one thing I want to do is make sure I don't stay still. I was quite still for five years – sometimes I played better, sometimes worse, sometimes phenomenal, sometimes rubbish. You take steps forwards and backwards. It is not very good for your head if you go up and down and up and down.

"I want to try to keep going up, with my quality and with my decisions that I make. I am 27, the best I have ever been, I still have room to improve and I want to make sure that room doesn't stay empty. I want to go into that room. It feels like a big moment."

So boss, what are your thoughts on the recent form of these two?“In every game they turn up with strong performances” May 19, 2017

Szczseny is yet to make a decision on his future, but insists Arsenal's own verdict will play a huge role in ending a difficult dilemma.

"The uncertainty over my future is also quite draining," continued the Poland international, who insists he has remained a massive Arsenal fan.

"In a way it has kept me going. You don't know what is going to happen or what your options are going to be and that pushes you subconsciously.

"You want to perform well enough that you are not short of options. There is a bit of adrenaline, you don't know who is watching you. It's not a pleasant feeling but it was a motivating one.

"When I have my head on the 2017-18 season, then we make a decision – first Arsenal has to and then I have to. I want to make sure I take my time, clear my head of this season, and then focus on doing the right thing. What that is time will show.

"For 10 years I played for a club I loved. The thing that sticks out not playing for Arsenal is, although when you lose it hurts just as much, when you win it doesn't taste as good. I would never say I give less to Roma than I do to Arsenal, it is just that the emotion is different."