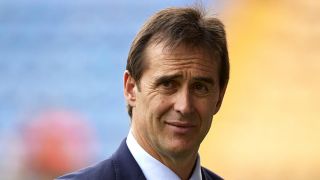 Newly appointed Real Madrid head coach Julen Lopetegui said leaving his role with Spain was the saddest day of his life after the death of his mother.

Lopetegui was announced as Zinedine Zidane's successor on Tuesday, prompting the Royal Spanish Football Federation (RFEF) to dismiss him from his position as national team coach less than 24 hours later, just two days before their opening World Cup game against Portugal.

An emotional Lopetegui reflected on the lowest point of his career in football and said the Spain squad trained well after hearing the news that he would be joining Madrid.

The 51-year-old told reporters at his official presentation as Madrid boss: "Yesterday [Wednesday] was, after the death of my mother, the saddest of my life. Today is the happiest day of my life.

"It was a surreal day. One of the nice things about such a difficult day was the respect and affection shown to me by the players. Respect is earned and I think I earned it. My staff and I worked really hard and they've taken that dream away from us.

"I will watch and be supporting like any other Spaniard. I feel I have participated in that team and I believe we are going to have a great World Cup, despite everything."

Lopetegui played for Madrid's second team in the 1980s and was in charge of Castilla between 2008 and 2009.

He is tasked with reviving Los Blancos' domestic fortunes after they finished third in LaLiga in 2017-18, though he will be expected to maintain their dominance in the Champions League following three consecutive triumphs.

He said: "We're going to fight to be as good as we have been in the history of the club.

"I feel the strength that accompanies Real Madrid here. You have to be strong here and we're going to use that strength to keep going in footballing terms and managing the wonderful footballers we have.

"Together we want to try to win everything."