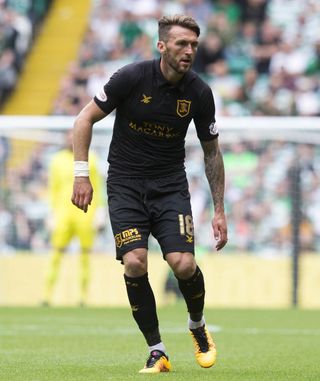 Livingston may not have much riding on their final three games but for Lee Miller they could mean everything.

The striker returned off the bench last Saturday following his second four-month lay-off of the season and is determined to prove he is worthy of a new contract.

The 35-year-old – who has been troubled by calf and knee injuries this term – said ahead of Saturday’s Ladbrokes Premiership clash with St Johnstone: “It’s been a long season, a long season in the gym working hard. But I’m back now so hopefully I can kick on.

“I have been lucky in my career that I’ve not had lengthy spells out, it just so happens it happened now. It’s been disappointing in terms of trying to get back and breaking down but it’s good to be back with the boys.”

On his future, the former Aberdeen striker said: “I have nothing just now. I spoke to the club just before I got injured for the second time. They wanted me to be here and hopefully that’s not changed.

“Hopefully I can kick on with talks next week maybe and get somewhere.

“I love it here, it’s a great bunch of boys and the coaching staff are really good. We do things properly here – we were doing triple sessions on Thursday, we’re not tailing off. We keep on the go and you can see that in performances.

“I’m just looking to get as many minutes as I can and contribute as much as I can to the team, just to prove I have still got it.

“When you get to a certain age you have to prove your fitness if nothing else, and what you can give to the team. I think I have got a lot to offer.”