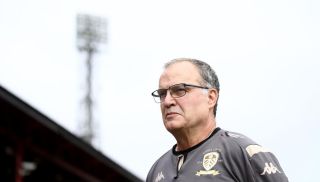 Marcelo Bielsa and Leeds were surprise winners at the Best FIFA awards on Monday.

To the bemusement of many fans who have not always associated Leeds or Bielsa with fair play, the veteran Argentinian and his players were awarded the Fair Play Award for allowing Aston Villa to score against them in April.

Angry scenes broke out after Mateusz Klich scored for Leeds while Villa’s Jonathan Kodjia lay injured on the field. Bielsa insisted Leeds, despite the attempts of former defender Pontus Jansson to stop them, allow Villa to score immediately from the kick-off.

Captain Liam Cooper and fitness coach Benoit Delaval collected the award on Bielsa’s behalf at the ceremony in Milan.

The renowned coach, currently in his second season at Leeds and in English football, caused something of a stir in January when he admitted to having watched all of United’s opponents train.

The club was fined £200,000 as a result – a penalty Bielsa paid out of his own pocket – and the 64-year-old was the subject of some derision as a result.

Dubbed as ‘Spygate’, the topic was not far from conversation in the wake of Bielsa’s award, as Gary Lineker tweeted a spy emoji in reply to the announcement, while on Radio 5 Live, a disbelieving Chris Sutton asked: “Do previous misdemeanours not count?”