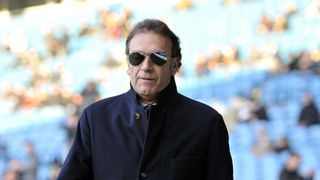 The Italian originally took ownership of the Championship club in February 2014, only to be disqualified the following month when a court in his homeland found him guilty for the non-payment of import duties on a boat.

Cellino successfully overturned that Football League ruling last April, but the former Cagliari owner was subject to a new disqualifying condition after the full disclosure of documents from the Italian court was made available, and he was demanded to resign within 28 days.

A fresh appeal was launched to the Football League's Professional Conduct Committee (PCC) and it was announced in December that Cellino was able to remain as a club director of Leeds until the case was heard.

However, the original ruling has been upheld and Cellino is now disqualified from acting as a "relevant person" as per Football League regulations until April 2015.

A Football League statement read: "A Professional Conduct Committee chaired by Tim Kerr QC has rejected an appeal by Leeds United president Massimo Cellino against the recent decision by the board of The Football League that he is subject to a disqualifying condition under its Owners' and Directors' Test.

"The PCC found that the reasoned judgment of the Italian court, once it had become available, was for an act involving dishonesty as determined by the board in its original ruling in March 2014.

"Mr Cellino's appeal against that original decision had been upheld on the basis that it could not be concluded that the offence necessarily involved a 'Dishonest Act' for the purposes of the Test.

"Once the reasoned judgment became available, the board considered the matter again and concluded that it clearly demonstrated that Mr Cellino's offence did indeed involve acts that would reasonably be considered to be dishonest."

A PCC statement on the decision to dismiss Cellino's appeal added: "We consider that the judge's findings of fact and her description of Mr Cellino's state of mind based on them, is of conduct which would reasonably be considered to be dishonest.

"We therefore conclude that Mr Cellino has been convicted of an offence involving a 'Dishonest Act' within the meaning of the rules, and that he is accordingly subject to a 'Disqualifying Condition'."

Leeds, who sit 20th in the Championship, have confirmed they will continue to review their legal options.

"Mr Cellino would like to thank the fans, sponsors and members of the wider footballing community that have given him overwhelming support, not just since the disqualifying order was issued but since he arrived at the club," read a statement on the club's official website.

"We are surprised and disappointed by the verdict, however we are continuing to take legal advice.

"We will release further statements in due course."