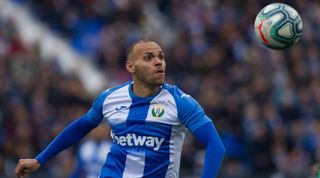 Barca have been allowed to make the emergency signing of Braithwaite outside of the transfer window because of injuries to Luis Suarez and Ousmane Dembele.

As part of the ruling they can only sign free agents or players currently with one of the club's in Spain's top flight.

Sky Sports reports that Braithwaite is now their priority target after ending their pursuit of Real Sociedad's Willian Jose. They have also shown interest in Getafe striker Angel Rodriguez, who has a £7.5m release clause.

Yet according to Marca, Braithwaite is expected to complete his switch to the Nou Camp imminently, with Barcelona activating his £15m release clause.

The Denmark international will only be allowed to play in league matches, with Barca having already submitted their squad for the Champions League knockout phase.

Leganes, who are 19th in the table and battling against relegation, understandably do not want to lose the forward. Especially because, as part of the rules, they are not able to sign a replacement as things stand. The only way they could would be if they were to have a long-term injury of their own.

That is why they have appealed to La Liga. They are also expected to issue a statement outlining their displease at the rule if Braithwaite does leave.