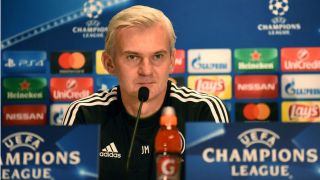 Jacek Magiera has acknowledged that Legia Warsaw's Champions League clash against Real Madrid has been made even more difficult by having to play the match behind closed doors.

Despite an appeal from the Polish club, UEFA upheld their decision to issue a one-match stadium ban after finding Legia's fans guilty of crowd disturbances, setting off fireworks, throwing objects and racist behaviour during their 6-0 Champions League defeat to Borussia Dortmund.

And Magiera, whose side are bottom of Group F and will drop out of this season's competition should they lose on Wednesday, was quick to criticise the radical section of the club's support.

"It's something you never want to see, I feel ashamed," he said. "UEFA's decision has been difficult for us to take but we accept it.

"Playing without spectators in the stands is like playing in stadium without soul. We count on our supporters as our 12th man.

"[Apart from the radical element] we have great fans who really motivate the team and deserve to be known for the great supporters they are throughout Europe.

"I hope that in years to come Real Madrid can find out for themselves, when our stadium reopens, with the stands packed and our fans signing."

Legia were beaten 5-1 by Madrid in their last Champions League outing, with sections of the club's travelling support also involved in violent clashes with police before that fixture in Spain's capital.