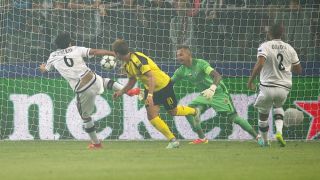 Dortmund were somewhat surprisingly beaten 1-0 by RB Leipzig at the weekend, but the Bundesliga defeat clearly did not impact them in Poland on their return to European football's elite club competition as they impressed right from the off.

Mario Gotze, Sokratis Papastathopoulos and Marc Bartra all found the net within 17 minutes and Legia were unable to bounce back as Dortmund cruised to an easy win, with Raphael Guerreiro, Gonzalo Castro and Pierre-Emerick Aubameyang scoring after the interval.

Gotze's opener represented his first goal for Dortmund since his return to his boyhood club after an underwhelming three-year spell with Bayern Munich, with his previous goal in a competitive game for the club coming in the 6-1 Bundesliga win over Greuther Furth in April 2013.

The Germany international's return to the Signal Iduna Park was initially met by scepticism by some fans and his unconvincing performances so far this campaign did little to win over his critics, but he will have silenced some of his doubters with Wednesday's outing.

Thomas Tuchel will have been equally pleased with Ousmane Dembele's performance on the left wing, with the Frenchman beating his direct opponent time and time again as he had a hand in three goals.

Gotze gave Dortmund a dream start as he headed home from close range after just seven minutes to open the scoring. Dembele sent in a superb cross from the left and the Germany international beat goalkeeper Arkadiusz Malarz.

Dortmund were simply unstoppable in the opening stages and Sokratis doubled their lead in the 15th minute. Guerreiro found the centre-back with a well-taken free-kick from the left after a foul on Dembele and Sokratis found the net with a strong header.

Things went from bad to worse for Legia as Bartra opened his Dortmund account. Malarz made a triple save to deny Guerreiro, Aubameyang and Marcel Schmelzer after a free-kick from the edge of the box, but it was fourth time lucky as Bartra eventually tapped into the empty net from the rebound.

Dortmund continued to cause the Warsaw defence all kinds of trouble each time they charged forward and Aubameyang was unfortunate not to find the net when he chipped the ball over Malarz, only to see his delicate attempt hit the sidenetting.

Legia could have pulled one back in the 39th minute when Thibault Moulin escaped the attention of his marker, but his attempt to lift the ball over Roman Burki lacked the height and power to really worry the Dortmund goalkeeper.

Tuchel's men kept on pushing for more after the interval and it was Guerreiro who piled even more misery on the hosts in the 51st minute. The Portugal international reacted alert after Dembele had his shot blocked and fired the ball past Malarz with a low shot.

Dortmund were not satisfied just yet, however, and Castro added a fifth in the 76th minute just moments after coming on to replace Gotze, before Aubameyang added his name to the score sheet late on following a quick counterattack.