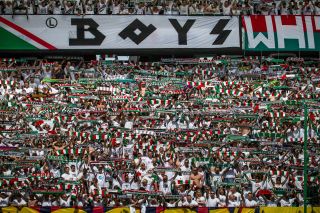 Supporters were found to have engaged in racist behaviour during the home tie of the club's UEFA Champions League qualifying second-round clash with The New Saints.

The Polish outfit clinched progression on the night after a 1-0 victory handed them a 4-1 aggregate win, setting up a play-off clash with Steaua Bucharest in the process.

However, they will be without support from the north stand of their Stadion Wojska Polskiego home during the second leg of that meeting, after being found guilty by UEFA's Control and Disciplinary Body.

The return leg of their encounter with Steaua will take place on August 27, and is likely to prove decisive in both teams' bid for a place in the group stages.

Legia are not the only club to have been sanctioned under Article 14 of UEFA's disciplinary code during the early stages of the 2013-14 edition of the Champions League.

In July, Dinamo Zagreb were also ordered to close a stand after fans were found guilty of "discriminatory conduct" during their qualifying second-round match against Fola Esch.