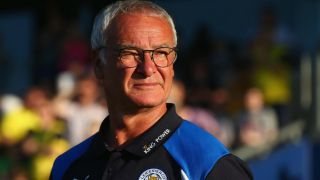 Leicester City will be able to deal with the departure of midfielder N'Golo Kante, according to manager Claudio Ranieri.

Chelsea completed the signing of 25-year-old France international Kante on a five-year deal for a reported £32million fee on Saturday.

However, Ranieri believes the defending Premier League champions can deal with his departure, just like they did when Esteban Cambiasso left for Olympiacos before their title-winning season.

"I can wish only the best for him," Ranieri told the Leicester Mercury.

"I said at the beginning I wanted to keep all my players, but he pushed and said he wanted to go, I prefer not to keep because there were two or three teams and we couldn't keep him.

"We tried to keep him but he wanted to go. It is okay for us. Last season Cambiasso went and now it is Kante."

To combat Kante's departure, Leicester have signed defensive midfielder Nampalys Mendy from Nice, but Ranieri insists he will not be a direct replacement for his compatriot.

"Mendy is not the same, just plays in the same position," Ranieri said. "At this moment I am very happy with all the squad."

He added: "Wes Morgan has signed a new contract and I am very pleased because now slowly, slowly all the others will sign a new contract."