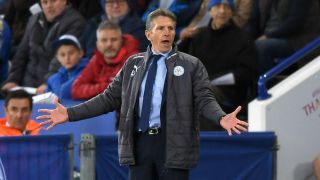 Former Birmingham City man Gray has not always been trusted by Puel's predecessors - starting just 11 league games for Claudio Ranieri and Craig Shakespeare combined - but grasped his chance with two hands on Sunday in an outstanding display.

Although Jamie Vardy struck the first goal of Puel's reign, just as he had for both Ranieri and Shakespeare, it was the slaloming Gray who made the opener possible.

And the 21-year-old was then the source of the second, too, with a low cross-cum-shot that Jonjoe Kenny clumsily helped into the net to give interim Everton boss David Unsworth a mountain to climb.

The big-spending Toffees could not mount a comeback and the winless run that saw off previous manager Ronald Koeman now stands at seven games in all competitions.

Everton remain on eight points in 18th place, while Leicester climb to 11th with a deserved victory.

FT: Leicester 2-0 Everton. It's another disappointing for the Blues at Leicester. October 29, 2017

Puel's principal change to the home side saw Riyad Mahrez handed a central attacking role, but it was Gray - taking the Algerian's usual wide berth - who threatened first with a low drive just wide of the left-hand post.

And it was Gray who inspired the breakthrough after 18 minutes with an outstanding run. The winger tore away from three Everton challenges in a surging burst and slid a pass through for Mahrez, who in turn centred and found Vardy for a simple finish.

Vardy turned provider for Mahrez to work Jordan Pickford with a low shot on the turn, before Gray made another crucial contribution just before the half-hour mark.

The England Under-21 international drifted out to the left and then cut back inside to deliver, with Kenny mistiming his attempted right-footed clearance and instead deflecting the ball past a stunned Pickford.

GOALLLLLL!DEMARAI GRAY MAKES IT 2-0! YASSSS!His shot connects with Kenny and goes into the top corner October 29, 2017

Everton's best efforts of the first half followed but Kevin Mirallas, who made his professional debut under Puel at Lille, swept a 20-yard curler just wide and then found Kasper Schmeichel alert to save a second strike.

Although Unsworth sought to change the game with the half-time introductions of Beni Baningime and Oumar Niasse, the Toffees continued to toil in front of a deep, clearly content Leicester defence.

An optimistic Phil Jagielka overhead-kick was gathered by Schmeichel, but that proved to be about the extent of Everton's attacking efforts as the goalkeeper also dealt with a series of corners.

Leicester cruised through the closing stages to claim a third straight win in all competitions, their fans mocking Everton with chants of: "All that money and you're going down."