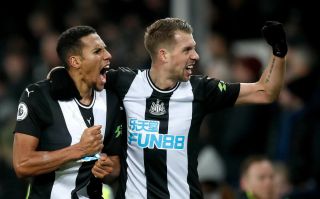 Substitute Florian Lejeune scored twice in added time as Newcastle snatched the unlikeliest of 2-2 draws at Everton to spoil Moise Kean’s celebrations after his first goal for the club.

The Toffees were cruising deep into four minutes of stoppage time at the end of the second half thanks to goals from Kean and Dominic Calvert-Lewin but threw away the three points with some comical defending which stunned the majority of Goodison Park.

Steve Bruce’s side were barely in the game – they had managed just one shot on target – when Lejeune flicked home an overhead kick.

There were possibly 90 seconds left at that point and the home side should have killed off the game, having controlled so much of it, but panicked and when the visitors pressed forward Lejeune forced home his second in a goalmouth scramble.

It ruined what should have been Kean’s night after the striker finally produced the performance Goodison Park had been waiting for.

Barely a month ago Kean, memorably, was taken off by caretaker manager Duncan Ferguson just 19 minutes after coming on as a second-half substitute at Manchester United in what was arguably the lowest point of his short Everton career.

But the 19-year-old Italy international has been given a chance to impress by new boss and compatriot Carlo Ancelotti and marked his first back-to-back Premier League starts with that all-important goal in his 22nd appearance since a £27.5million move from Juventus in the summer.

Goodison had witnessed little if any of the potential talent which saw Kean score in four successive appearances last April for the Serie A champions but after six months in English football the teenager is showing signs of adapting.

Usually it is Calvert-Lewin who is Everton’s all-action man up front but Kean was the Toffees’ tyro in the first half.

Calvert-Lewin could satisfy himself with becoming the first Everton player into double figures in the league this season with a neat second-half finish and the first Englishman to score 10-plus for the club since since Wayne Rooney in 2017-18.

That was until Lejeune, a 70th-minute introduction for defender Ciaran Clark, produced a dramatic finish.

After 43 appearances for the Magpies the £8.7million signing from Eibar in 2017, went one better than Kean, scoring his first two goals for the club within 102 seconds of each other.

It was not the way Ancelotti anticipated celebrating the anniversary of his first month in charge.

His side have still only suffered one defeat in six league matches but he will be furious they blew the chance to move within two points of fifth-placed Manchester United.

Having formulated a reasonable opinion of his squad Ancelotti had called for his players to be braver, saying they had previously been too “shy”, and they had no better opportunity to be more expansive against opponents who had nine senior players out.

With Allan Saint-Maximin also rested having only returned from injury in Saturday’s win over Chelsea the visitors lacked pace up front and so posed little threat on the counter-attack.

But Newcastle offered them little room for manoeuvre, stringing five across the back with Isaac Hayden and Matt Ritchie playing as stand-in wing-backs with a midfield four dropping deep in front of them.

Djibril Sidibe tested Martin Dubravka from distance as did Kean, who was undoubtedly the most energetic player on the pitch in the opening half-hour.

He had received little reward for his efforts until his moment finally came, controlling Bernard’s little lobbed pass at the second attempt and firing through a forest of legs and past Dubravka to score after 19 previous unsuccessful shots in the league this season.

The only surprise was he was not involved in Everton’s 54th-minute second, which was all about Lucas Digne’s slide-rule pass and Calvert-Lewin’s turn and shot.

Newcastle, with one win in the last six league matches and one shot on target in 90 minutes, were fortunate not to concede more with Calvert-Lewin (twice), Bernard and Yerry Mina going close after Kean had departed to a standing ovation.

Lejeune ultimately made them pay for those misses.