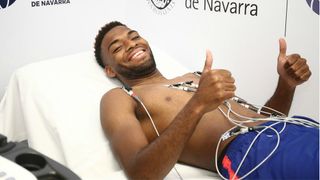 Thomas Lemar is free to start pre-season training with Atletico Madrid after completing his medical tests.

Atletico are reported to have paid €60million to bring Lemar to LaLiga from Monaco, where he won the Ligue 1 title in 2016-17.

Lemar underwent his medical tests in the Spanish capital on Friday and has now been given the all-clear to start training.

Atletico started their pre-season campaign with a penalty shootout win against Arsenal in the International Champions Cup in Singapore on Thursday.

Diego Simeone's side face ICC fixtures against Paris Saint-Germain and Inter, as well as friendlies with Stuttgart and Cagliari.

Atletico's first competitive match of the 2018-19 campaign will see them take on city rivals Real Madrid in the UEFA Super Cup on August 15.

Check out how Thomas Lemar's medical went! He completed it at , which is under our players’ First Sports policy. Now he's ready to join our preseason!July 27, 2018