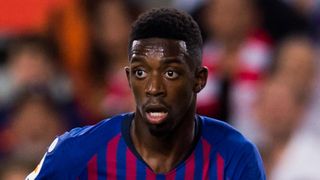 Barcelona defender Clement Lenglet has played down rumours of unrest surrounding team-mate Ousmane Dembele, who missed the club's defeat to Real Betis due to an illness that has been the subject of debate.

Reports claimed that Barca were unhappy with the way Dembele informed them of a stomach bug ahead of the game, and France coach Didier Deschamps added to the furore by publicly stating that the midfielder is frequently late for international team duties.

But Lenglet joined Blaugrana coach Ernesto Valverde in backing the 21-year-old, saying he believed Dembele's illness was a genuine reason for missing the 4-3 reverse at Camp Nou.

"I do not think there's any problem with him," said Lenglet.

"He was sick, he could not be in training and the coach chose another player.

"Those are things that happen in all the clubs and we all have to work for the same goal."

Dembele has not started a league game for Barcelona since the 1-1 draw with Athletic Bilbao on September 29, despite fellow forward Lionel Messi spending a spell on the sidelines with a fractured arm.

Messi returned to match action and scored twice in the defeat against Betis, and Lenglet spoke about the experience of working alongside one of the world's best players.

The 23-year-old, who joined Barcelona from Sevilla in July, said of Messi: "As a rival you try to stop him but we always knew it was very difficult, as a team-mate it is different because he can change the game and he is still a very humble person, he has great respect for everyone and that makes his legend even bigger.

"We talk about a lot of things, he asks me about French football and we talk about how to play on the field, chatting with him is different from everything.

"When the best player in the world speaks, you have to listen very carefully, and not only that. open your eyes very well and look at what he does."