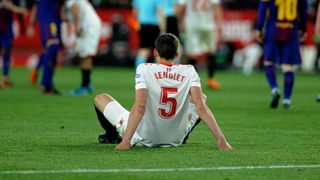 Sevilla forward Nolito insists Clement Lenglet's team-mates will "wish him the best" if he joins Barcelona.

The French defender has been linked with a host of clubs after impressing for Sevilla this season, but speculation suggests that the Catalan giants are in pole position to sign the 22-year-old.

His agent, Gregory Dakad, has been keen to stress nothing has been decided, and that his client is focused on his side's upcoming match with Alaves on the final day of the LaLiga campaign.

Nolito, however, has spoken publicly about the potential move and says it is understandable that Lenglet might want to join the LaLiga champions.

He told Radio Marca: "I don't like to give advice. Barcelona are a very demanding club, you have to win whatever it takes, there's a lot of competition. But he's a young kid and maybe he aspires to play for one of the best clubs in the world.

"If it's true and he goes, we wish him the best. It would be a shame because he's a powerful centre-back."

Earlier this week, Dakad told Estadio Deportivo: "He still does not know what he is going to do or what he wants to do next summer.

"At the moment, Clement focuses on the end of the season.

"Of course, there are clubs that are interested in Lenglet. But first, he wants to finish the season well – he really likes the club and the city here.

"I can promise you that I do not know what he wants to do and I cannot say which clubs are interested, but in Spain and in other countries there are clubs that would like to meet us. At the moment, however, there is nothing decided."