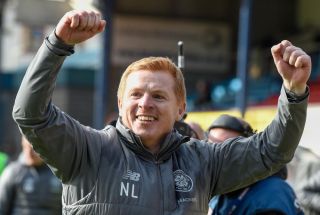 Neil Lennon revealed he urged Celtic to keep going all the way to their last-gasp 1-0 win at Dundee which took them 10 points clear of Rangers at the top of the Ladbrokes Premiership.

The visitors stepped up the pressure after a goalless first half but it looked like the second-bottom Taysiders would survive six minutes of added time until French striker Odsonne Edouard converted a James Forrest cut-back for a dramatic winner.

Interim boss Lennon said: “I said at half-time that we will wait until the 49th minute of the second half if we need and they were true to their word, they followed instructions out.

“You are not going to roll over teams, team who are fighting for their livelihoods and Dundee fought like Trojans, like warriors and made it very difficult for us.

“I am not going to analyse the game right now.

“The object of today was to win the game, we did that; go 10 points clear, we’ve done that, and now we can assess things in the next two weeks (during the international break).”

Lennon, who took over until the end of the season in February when Brendan Rodgers left for Leicester, put his own exuberant goal celebrations down to “relief, emotions, importance”.

He said: “It is not easy coming in at this time, the way things are, following in (Rodgers’) shoes and taking on a style of play you are not used to, a different environment at the training ground and different players.

“So I had to do it bit by bit and what you saw there was the relief.”

The next of Celtic’s eight remaining league games after the international break is against Rangers at Parkhead and Lennon insists the pressure on his side was eased by the late win.

“It means we don’t have to win it. Ideally we would love to and get over the line as quickly as possible but all the onus is on the other teams around us.

“The gap between first and second is bigger than between second and third which is again significant for us.”

For all their efforts Dundee remain one point ahead of basement side St Mirren.

Boss Jim McIntyre was surprised at the length of time added on by referee Bobby Madden, believing it would be “probably four maximum” but insisted they also had themselves to blame.

He said: “It was obviously extreme disappointing to lose so late on.

“I thought we deserved a point for the effort we put into the game but ultimately we’ve been done in the last minute or two of the six that were added on.

“Having said that, that’s not the reason we lost. We had a great opportunity on the counter-attack with two minutes to go and we’ve got to be better.

“That’s the reason we are where we are.

“We’ve been getting into such good areas in each of our last few games and haven’t punished teams.

“We need to be better in the final third, simple as that.

“We didn’t do what Celtic did. They were ruthless. That’s why we’ve not picked up enough points since I came here.”