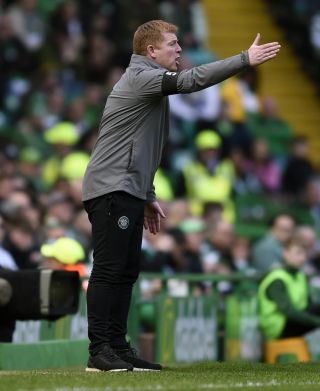 Neil Lennon has handed Celtic a target of 90 Ladbrokes Premiership points ahead of Sunday’s Old Firm game at Ibrox.

The Hoops moved on to 84 points last week with a 3-0 win at Aberdeen which clinched an eighth successive title.

They have two league games remaining, at Rangers and at home to Hearts, before they play the Jambos in the William Hill Scottish Cup final at Hampden Park on May 25.

The champions have already beaten last season’s points tally of 82 but interim boss Lennon wants more, starting with the final Glasgow derby of the season.

He said: “I don’t think the players need any motivation for this game. The fixture takes care of itself. There is a lot of build-up to it.

“We were more concerned with winning the league.

“It was hugely important for the club and we have the big one in the trophy cabinet again and we can look forward to the remaining games and obviously we have a huge cup final to look forward to at the end of the season.

“I would like us to finish on 90 points. At the minute we are on 84 and we have two games to try to get that and that’s what we’re going to try and do.

“I’m excited, looking forward to it. We go into the game as champions.

“We’re on great form and Rangers are as well. It’s a game everyone is looking forward to, no more than myself.

“It’s been a while since I was at Ibrox with Celtic so it is always a good occasion to look forward to.”

Lennon was put in charge until the end of the season in February when Brendan Rodgers suddenly left for Leicester.

He insists the Celtic players have already exorcised the ghost of the 1-0 defeat
at Ibrox at the end of the year.

The former Hoops captain and manager said: “We already beat Rangers on March 31 so we’ve already rectified that with a really good performance.

“We come into this one off the back of a win in the last derby.

“It’s always great to win at Ibrox as a Celtic player or Celtic manager.

“We know what to expect going there. Rangers are a formidable team at home and it will be an electric atmosphere.

“It is a great game for any player involved with Celtic to look forward to. We are going to have to play well.

“It’s not a meaningless game by any stretch of the imagination. We have our own targets and motivations.”