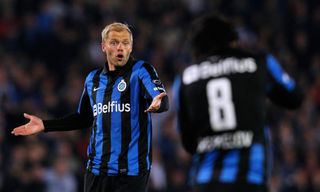 The 36-year-old striker is a free agent after leaving Club Brugge at the end of last season and has been training with Championship side Bolton.

Gudjohnsen was a big fans' favourite during a two-year spell with the Lancashire club between 1998-2000 and Lennon is considering whether to offer the former Chelsea and Barcelona man a contract.

"He asked us would we take him in and have a good look at him, so that's what we're doing at the minute," Bolton manager Lennon told BBC Radio 5 live.

"He's always been a class player. You don't play for Barcelona for three or four seasons without being a really good player."

Lennon revealed that Gudjohnsen also harbours ambitions of forcing his way back into the Iceland squad, with his country sitting second in Euro 2016 qualifying Group A.

"He wants to give it another go, Iceland are going well and he'd like the opportunity to play for Iceland again," he added.