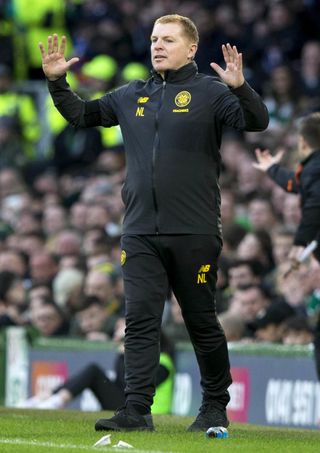 Celtic manager Neil Lennon has urged his players to keep calm and focus on their own job after Rangers’ slip-up.

The Ladbrokes Premiership champions stayed five points clear of Rangers, who have a game in hand, after the Ibrox men lost against bottom club Hearts on Sunday.

The result puts Celtic in the driving seat two games after their derby defeat.

Lennon, whose side face Tommy Wright’s St Johnstone in Perth on Wednesday, said: “It’s a result that happens. Things will twist and turn maybe as we go along.

“We are just concentrating on St Johnstone and looking forward to the game because we have played quite well since the turn of the year.”

When asked if his players had been lifted by the Tynecastle result, he said: “I’ve not really detected any change in their emotions over the last couple of days.

“Our focus is on Wednesday, it will be a tough game. Tommy has had a couple of decent results as he always does. Sometimes he gets a bad run and then turns it round into a good run. He is quite shrewd that way.

“We just have to be careful and concentrate on our own business and keep things nice and calm.

“They have been fantastically consistent over the years in terms of league titles and cup wins, they have been absolutely amazing.

“Every year is different. This year is another one where they have a challenge on and they are rising to the challenge as normal.”

Lennon does not expect any more transfer business after completing a deal for Ivorian midfielder Ismaila Soro on Monday, who joins Polish striker Patryk Klimala in arriving at Parkhead this month.

“If we don’t do anything else then I will be happy,” Lennon said. “We have a great squad and real quality in it. It’s a very difficult window.

“We have got a couple of good players in and streamlined the squad a bit.

“If there’s something available that catches our eye and we can afford it then we might look at it but at the minute it’s very quiet. I don’t think anyone else will be leaving.”

Soro will not feature in Perth but Lennon believes he will be a worthwhile addition in the coming months following his move from Bnei Yehuda Tel Aviv.

“He’s had a good career so far, played in some tough leagues,” Lennon said.

“He has played for a team in Israel who are not one of the top teams but he has stood out and he has been very consistent. He can drive, he can pass the ball, he can break up play.

“He has been playing up to the end of the year but he has been training on his own for the past week, so it may be a week or two before we use him.”