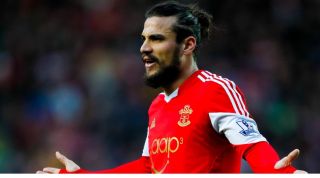 Osvaldo arrived at St Mary’s in the summer of 2014 but lasted just half a season before being sent to Juventus on loan, following a training ground bust-up with team-mate Jose Fonte.

He retired in August 2016 after a spell back in Argentina with Boca Juniors to pursue a career as a musician.

The 33-year-old, who is currently starring on Italy's answer to Strictly Come Dancing, insisted he has no regrets about leaving the sport behind him.

“There are two situations where you have big problems: when you have no money or when you have too much of it, because your head goes,” the 33-year-old told Corriere della Sera.

“It’s better to be in the middle: with less money, you live a more relaxed and peaceful life.

“It would have been harder to keep doing something I didn’t want to do anymore. I never had regrets. If things go a certain way, it’s always for a reason. You can fix a mistake, but not a regret.

“Everyone tells me I’m crazy. Even my father, a retired musician, occasionally says to me: ‘But I miss seeing you on the field.’

“It breaks my heart. Fortunately, there’s my mother who always says: ‘Just be happy.’

“At concerts in Argentina I’ve seen people singing things that maybe I’d written in my bedroom at 4am.

“And they could hear those words. That’s pure magic. I don’t need anything, that’s my secret.”