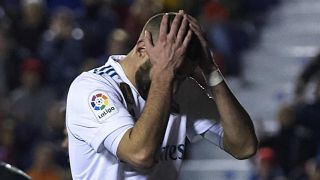 Giampaolo Pazzini came off the bench to score a dramatic late equaliser on his debut, earning Levante a shock 2-2 draw at home to LaLiga champions Real Madrid.

Fellow substitute Isco thought his own late goal would prove decisive for Madrid but Pazzini struck in the 89th minute to earn the relegation-threatened hosts a crucial point against the LaLiga champions.

The visitors headed to Ciutat de Valencia with back-to-back league victories under their belt, prompting hopes Zinedine Zidane's men were turning the corner despite the shock Copa del Rey quarter-final loss to Leganes.

But although the Frenchman was able to name what many consider his strongest starting line-up for the first time this season, his side were twice pegged back by Levante and denied the chance to move above Valencia into third position.

Sergio Ramos headed in an early opener from Toni Kroos' corner, setting a new record as the Spain international became the first defender to score in 14 successive LaLiga seasons.

But Levante levelled before the break as a simple ball down the middle sent Jose Luis Morales racing away from Ramos and, although Keylor Navas made the save, Emmanuel Boateng was in the right place to tuck in the rebound.

Isco's goal from Karim Benzema's pass with nine minutes left appeared to have rescued Madrid, but Zidane's men fatally switched off at the back, Pazzini beating Navas with an effort that was too powerful for the goalkeeper to keep out.

2 - Levante are the only team to have scored more than one goal vs Real Madrid in first halves in La Liga this season (2). Boateng February 3, 2018