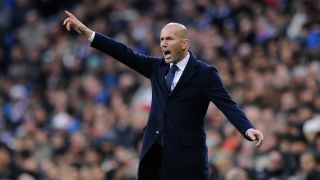 Antoine Griezmann scored the only goal after half-time as Diego Simeone's men made the short trip back across the capital with three points secured.

Zidane refused to concede his team's chances of winning La Liga this season, despite them now lying four points shy of Atletico and 12 adrift of leaders Barcelona with as many matches to play.

There was mutiny in the air at the Santiago Bernabeu on Saturday, with factions for and against club president Florentino Perez chanting against one another, while Cristiano Ronaldo later claimed he was "misinterpreted" over comments that appeared to criticise team-mates deputising for injury absentees Gareth Bale, Marcelo and Pepe.

But Zidane retains a sense of calm and will continue to trust the bulk of his first-team squad.

"I am not going to go crazy," he said afterwards. "When we win I don't let it go to my head and when we lose I don't go crazy.

"I am going to prepare for the [Levante] game. I will put out the best XI and that is that.

"I am responsible. I have to look for solutions so that doesn't happen again.

"It is the first defeat at home [since Zidane replaced Rafael Benitez as coach in January] and I wasn't expecting it.

"I knew that it was a difficult game. When you have chances you have to put them in."

One player who might be charged with doing just that from the start against Levante is youngster Borja Mayoral.

The 18-year-old forward came off the bench at half-time against Atletico to make a second Liga appearance in place of the injury Karim Benzema.

With the France international facing up to a month on the sidelines with a hamstring strain, Mayoral has a chance to stake his claim and continue a busy period.

Seven days before the Madrid derby, he completed 90 minutes and rounded off the scoring in a 3-1 win for Real Madrid Castilla against Sestao, before netting two superb strikes as the Under-19s beat Manchester City by the same scoreline in the UEFA Youth League.

"I put him on because Karim came off and I had to put on a nine," Zidane explained. "He is doing well and it was his opportunity.

"I would have liked him to score but he wasn't able to. I am happy with his work, he showed character."

Madrid's relative struggles are thrown into stark relief by Levante, whose 3-0 defeat at Villarreal on Sunday left them rooted to the foot of the table.

"It's time to keep fighting," said coach Rubi. "The last two away games have not left good feelings and I understand that people are upset. We must turn the page."

Rubi will be without David Navarro after the defender was sent off for a second bookable offence in the 56th minute at Villarreal, while Pedro Lopez remains sidelined with a knee problem.

Key Opta Stats
- Real Madrid have won one of their three Liga away games under Zinedine Zidane, drawing twice.
- Cristiano Ronaldo has scored 13 goals in his last 12 matches against Levante in all competitions.
- Goalkeeper Keylor Navas had a higher shots-saved percentage in Liga matches for Levante (80.24 per cent) than he does for Real Madrid (75.26 per cent).
- With four goals and one assist, Jose Luis Morales has been involved in five of the eight goals Levante netted in their past four home matches.
- Levante won on three of their previous four outings at the Ciutat de Valencia, with Barcelona's 2-0 triumph on February 7 the only blot on that sequence.