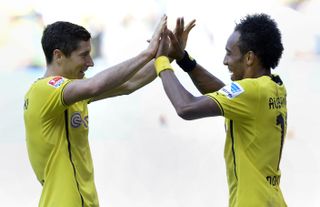 Juergen Klopp's men finished second to Bayern Munich in the Bundesliga last term, and also lost out to the Bavarian giants and the final of the UEFA Champions League.

However, Dortmund have since boosted their chances of avenging those disappointments with the acquisitions of Pierre-Emerick Aubameyang, Henrikh Mkhitaryan and Sokratis Papastathopoulos.

And, after Aubameyang scored a hat-trick in a 4-0 victory over FC Augsburg on the opening day of the season, Lewandowski is predicting a bright future for the club's latest additions.

"As far as the squad is concerned they are a great improvement," he told Sport Bild magazine. "I think we are better than last season."

Lewandowski made clear his desire to leave Dortmund in order to join up with Bayern ahead of the transfer window opening, but was refused his wish despite having just a year remaining on his contract.

The 24-year-old insists he remains committed to the cause, however, and says he has great faith in the German club's chances this year.

"Thanks to the new transfers I believe we are capable of anything. Everyone is motivated," he added.

The Poland international has scored 77 goals in 142 appearances for Dortmund, and also found the net in the win over Augsburg.