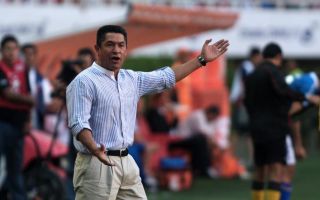 Since losing back-to-back matches, Queretaro are unbeaten in three to sit sixth in the Liga MX standings from 10 outings, eight points adrift of league-leading America.

The 2008 champions produced another impressive result on Friday, drawing 1-1 at home to fourth-placed Toluca.

And Queretaro coach Ambriz will be hoping for more of the same at Atlas, who are third in the table, as they aim to reach the play-offs.

"I have a great team, very well run, we are playing very attractive football and I hope that we get a good result," said the 49-year-old.

"We will improve the offensive end. Hopefully we have a good game that allows us to add [to our points tally]."

Queretaro will face an Atlas team still stinging from Saturday's loss to second-placed Monterrey, who scored two first-half goals to record a 2-1 win.

Monterrey are flying high, having won four of their past five league matches.

Next up for Monterrey are out-of-sorts defending champions Leon on Tuesday.

Leon have collected three points from a possible 15 to languish in 16th spot, just three points above basement club Morelia.

But Monterrey defender Victor Ramos insisted his team-mates will not be underestimating hosts Leon.

"Football is very complicated. Leon in the last tournament was wrong and then changed everything and was the champion," said the Brazilian.

"Leon we know are not a good time, but has very good team. We have to be very careful because they have very fast players.

"We know that and how difficult it will be the game. We have to get quiet, but it's eleven against eleven. We must seize opportunities and be sure to claim three points."

Tigres UANL - fifth in the standings - are also in action on Tuesday, hosting Santos Laguna, who have lost two games in a row.

Elsewhere, table-toppers America are at home to Veracruz on Wednesday.

Puebla will be out to end their run of three consecutive draws when they face Pumas UNAM.

Morelia can make it two wins on the trot if they beat Pachuca.

Second-bottom Universidad Guadalajara will be looking over their shoulder if Morelia win.

Universidad are only three points clear of Morelia and defeat to Chiapas could see them enter the weekend bottom of the table.