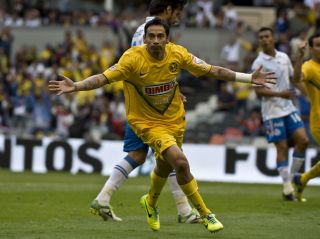 Rubens Sambueza opened the scoring in the 22nd minute for the winners, and he doubled his account just minutes later.

The visitors pulled a goal back on the stroke of half-time through Carlos Sanchez, but Narciso Mina's penalty five minutes into the second half restored America's two-goal advantage.

And that was enough for America to extend their unbeaten league run to six matches.

Eduardo Herrera scored in the first minute for the visitors and he added a second right on the stroke of half-time.

Carlos Quintero made it three in the 79th minute and Roberto Nanni's goal six minutes later was nothing more than consolation for Atlante, as Santos Laguna claimed their fifth successive win.

Leon, who sit third, dropped points for the third time in four matches after drawing 2-2 at home to Toluca.

Mauro Boselli put the hosts in front eight minutes before the break before Pablo Velazquez levelled the scores in the 64th minute.

At the other end of the table, Atlas claimed their first win of the season with a 3-1 success over Queretaro.

Edson Rivera, Flavio Santos and Vicente Vuoso all scored for the winners, as they tasted victory for the first time this campaign.

Other results saw Monterrey end a run of three straight defeats with a 1-1 home draw against Chiapas, while Morelia and Guadalajara finished with the same scoreline.

Elsewhere, there were goalless draws in the games between Tijuana and Tigres UANL, Pumas UNAM and Veracruz, and Pachuca and Cruz Azul.