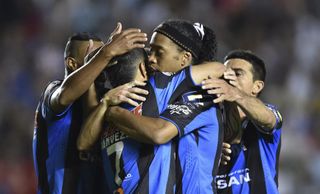 After surrendering a two-goal lead at Estadio Corregidora, a 10-man Queretaro earned an unlikely win as Brazilian striker Camilo Sanvezzo bagged his second of the match in the 93rd minute on Friday.

Sanvezzo managed to evade two defenders before poking the ball past America goalkeeper Moises Munoz with the outside of his foot.

Queretaro, who snapped a three-game losing streak, are just one point adrift of the Apertura play-off places in ninth spot after Santos Laguna were held to a 1-1 draw by Pumas UNAM.

America remain atop the standings with three regular-season games left, though their lead has been cut to two points after Atlas disposed of Puebla 2-1 on Saturday.

Queretaro started well in front of their fans as they took a two-goal lead into the main break courtesy of Sanvezzo and William.

Sanvezzo fired the ball ferociously into the net after 25 minutes and William doubled the hosts' advantage on the stroke of half-time, coolly slotting past Munoz.

Queretaro were dealt a blow seven minutes into the second half, when Ricardo Osorio saw red for a high boot and America took advantage with goals to Oribe Peralta and substitute Luis Mendoza.

But Queretaro refused to surrender, despite their numerical disadvantage, as Sanvezzo handed the outsiders all three points.

Defending champions Leon scored twice in the second half as they trumped Toluca 3-2 away from home on Sunday.

Monterrey rallied from two goals down at half-time to salvage a 2-2 draw against Tigres.

In other results, sixth-placed Chiapas accounted for Veracruz 2-1 and Pachuca - seventh in the standings - played out a goalless draw with lowly Universidad Guadalajara.

Second bottom Guadalajara escaped with a 3-3 draw at home to Tijuana after equalising in the final minute.