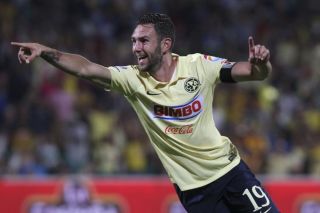 Layun upstaged strikers Oribe Peralta and Michael Arroyo as he fired America to a 4-1 win in round 10 of the Apertura at Estadio Nuevo Corona on Friday.

The Mexico international broke the deadlock four minutes before half-time, half-volleying past Santos Laguna goalkeeper Oswaldo Sanchez after a corner was flicked on to the back post.

Layun doubled America's lead nine minutes into the second half, catching Sanchez well off his line from outside the penalty area after the keeper stormed off his line.

He completed his hat-trick on the hour-mark, when he side-footed home after superb work from Arroyo on the byline.

Carlos Izquierdoz pulled a goal back for the hosts in the 70th minute, though Layun restored the visitors three-goal lead in the closing stages.

Back-to-back wins has America four-points clear of Monterrey, who have a game in hand.

Ronaldinho took his place in the Queretaro starting XI but they still drew 1-1 at home to fourth-placed Toluca on Friday.

The Brazilian icon was in doubt for the league fixture after missing Queretaro's midweek Copa MX match due to a stomach bug.

In other results, Leon's horrendous season continued after they were beaten 1-0 by Cruz Azul.

Tigres UANL climbed up to fifth after coming from behind to beat Pachuca 3-2.

Chiapas scored twice in the final 10 minutes to draw 2-2 at Pumas UNAM and Guadalajara played out a goalless stalemate against Puebla.