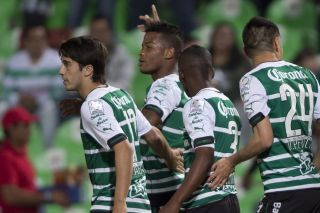 Goals from Mauro Cejas and Andres Renteria gave Laguna a 2-1 victory over nine-man Pachuca in Liga MX action on Friday.

Dieter Villalpando gave fellow Apertura play-off hopefuls Pachuca a 15th-minute lead, albeit with some help from a deflection at the Estadio Nuevo Corona.

But Cejas levelled proceedings 22 minutes later, tapping home from inside the six-yard box.

And after Aquivaldo Mosquera saw red in the 73rd minute, Renteria netted the match-winner from a difficult angle three minutes later.

Pachuca ended the match with nine men after Ariel Nahuelpan was dismissed three minutes from time.

Despite the loss, Enrique Meza's Pachuca (22 points) remain in the eighth and final play-off spot with one regular-season match remaining.

Laguna (-1) are level on points with Pachuca (+1) and Leon (+2), who played out a goalless draw at home to Puebla on Saturday, but adrift on goal difference.

Queretaro and Pumas are a point further back in 10th and 11th position respectively.

Dionicio Escalante and Liga MX's joint-top goalscorer Camilo Sanvezzo (11) were both on target as Queretaro accounted for basement side Morelia 2-0 on Friday.

Pumas ended a run of three consecutive draws with a 2-0 victory at Cruz Azul on Saturday.

Cruz Azul (20 points) remain a slim chance of reaching the play-offs, though they will need results to go their way.

Monterrey (24 points) are sixth in the standings but not guaranteed of a post-season spot after they crashed to back-to-back defeats - beaten 2-1 at home to fifth-placed Chiapas on Saturday.

The race for top spot will go down to the final round after league leaders America drew 2-2 at second-placed Toluca on Sunday.

America have collected 31 points from 16 matches and are two points clear of Toluca.

Tigres UANL and Atlas are a point further back following their respective draws.

Second-bottom Guadalajara held Tigres to a goalless stalemate, while Atlas earned a 1-1 draw against 10-man Tijuana.