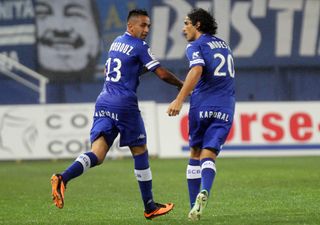 Ryan Boudebouz set the tone after six minutes with his first goal for the club before Whabi Khazri put the hosts in the driving seat from the penalty spot.

Mathieu Coutadeur's strike gave Lorient some hope before the interval, but Milos Krasic and Christian Romaric put the result beyond doubt in the second half before Larry Azouni's dismissal compounded a woeful night for the visitors.

Boudebouz rifled home from the edge of the box to cap a lively start from Bastia, with Khazi doubling their lead from the spot after he had been fouled by Coutadeur with 23 minutes gone.

Coutadeur made amends eight minutes later with a composed finish past Mickael Landreau to reduce the deficit.

But Krasic restored Bastia's two-goal cushion 14 minutes into the second half, dancing past two players before finding the bottom corner.

Romaric put the icing on the cake with a towering header, with Azouni given his marching orders just eight minutes after coming off the bench.