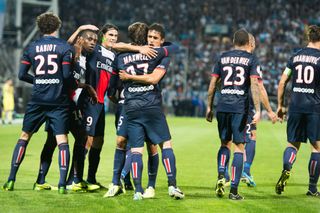 PSG were reduced to 10 men after just 34 minutes when Thiago Motta was sent off for a crude foul on Mathieu Valbuena in the penalty area at Stade Velodrome.

And after Andre Ayew slotted the resultant spot-kick, Marseille appeared set for victory against their fierce rivals.

But PSG – who had not won at Marseille since 2008 – staged a stirring fightback, with Maxwell's header on the stroke of half time giving them hope.

And the capital club completed the turnaround after 66 minutes, with Ibrahimovic stroking home the game's second penalty to give Laurent Blanc's men an excellent victory.

PSG are now level on points with Ligue 1 table-toppers Monaco, but sit second on goal difference.

PSG were unchanged from their 3-0 UEFA Champions League win over Benfica, while Jordan Ayew replaced Saber Khelifa in attack for Marseille.

Marseille made the brighter start to the match, with attacking midfielder Mathieu Valbuena forcing PSG goalkeeper Salvatore Sirigu into a smart save from his curling free-kick.

Sirigu was then called on to make a double save to deny Jordan Ayew and then Valbuena, while Andre Ayew should have opened the scoring but headed Rod Fanni's near-post cross just wide.

The hosts were handed a golden opportunity to seize the advantage just before the half-hour mark though, when they won a penalty after Motta's poor challenge.

The midfielder was given a straight red card for the high tackle, after he failed to deal with a ball into the box, and Andre Ayew seized the opportunity, emphatically converting from 12 yards to delight the raucous home crowd.

PSG manager Laurent Blanc tinkered with his side, introducing Adrien Rabiot for Ezequiel Lavezzi in a bid to bolster their midfield, and they nearly levelled proceedings shortly after when Marseille goalkeeper Steve Mandanda made an excellent save to deny Zlatan Ibrahimovic.

However, Mandanda could be considered to be at fault for PSG's equaliser, as his attempt to claim Gregory van der Wiel's lofted cross was unsuccessful, with defender Maxwell beating him to the ball to head home from close range just before half time.

The visitors looked the more comfortable of the two sides in the second half, although they were fortunate not to fall behind as Sirigu turned Dimitri Payet's effort round the post.

Marseille failed to take full advantage of their numerical advantage and were made to pay midway through the second half when Andre Ayew was penalised for tripping Marquinhos just inside the area.

Ibrahimovic was unfazed by lasers shone in his face from the crowd, coolly tucking his penalty into the bottom corner to give the defending champions the lead.

Marseille pressed in the closing stages to try and earn a share of the spoils, but their best effort – a header from substitute Florian Thauvin – was comfortably saved by Sirigu, as PSG held on for a gritty away win.