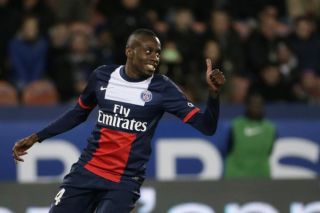 In truth, the reigning champions could be assured of their first ever back-to-back league triumphs a day earlier if Monaco fall to an unexpected defeat at the already-relegated Ajaccio.

The men from the capital are three-time French champions, but have never lifted the trophy in consecutive years. That feat has rarely looked in doubt during this campaign.

Sunday's task is simply to equal or better the result of their principality rivals to make sure of the title, but Wednesday's battling 1-0 home win over Evian proved that some things are easier said than done.

Laurent Blanc's charges were left to rely on an 89th-minute winner from Blaise Matuidi to bounce back from their 1-0 defeat to Lyon 10 days earlier.

And, while heaping praise on his midfielder, Blanc knows PSG will need to show a marked improvement this weekend should they require the victory.

"He never gives up, he's a player that believes right to the very end," he said. "It's not just a coincidence that he scored.

"We need to show a different attitude and approach if we want to win the league against Sochaux on Sunday."

Encouragingly for PSG, they demolished Sochaux 5-0 in the reverse fixture back in December.

A first-half effort from Thiago Silva was added to after the break by Ezequiel Lavezzi, Edinson Cavani and a Zlatan Ibrahimovic brace.

While this could prove to be an important fixture for PSG, it is arguably just as crucial for this weekend's hosts.

Sochaux currently sit two points adrift of safety, but could find themselves five points back if they lose on Sunday and Valenciennes are beaten at Guingamp.

With just four games of the season remaining, Sochaux could do with a few favours, although they did win this fixture 3-2 last season - Cedric Bakambu netting the winner six minutes from time.

On the injury front, Swedish striker Ibrahimovic (hamstring) is expected to be PSG's only absentee.