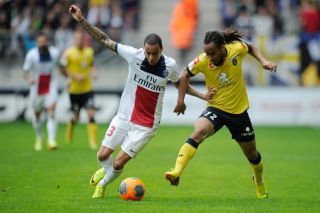 The defending champions went into the game knowing a win would secure a fourth French crown, but Laurent Blanc's men delivered a disappointing performance at the Stade Auguste Bonal.

PSG looked to be heading towards victory and the championship when Edinson Cavani gave them the lead midway through the first half.

But the capital club failed to build on that lead, and a determined Sochaux drew level when PSG captain Thiago Silva put through his own net early in the second period.

Yohann Pele was superb throughout in the Sochaux goal, routinely denying the visitors to preserve a precious point as they fight relegation.

Blanc's side still lead second-placed Monaco by eight points at the summit of the French top flight and will secure the title if they beat Rennes or the principality club cannot beat Guingamp a week on Wednesday.

PSG made a bright start to proceedings and came close to opening the scoring in the early stages as Yohan Cabaye saw a header cleared off the line by Julien Faussurier.

The visitors continued to create the better chances in a high-tempo first half, with only more heroics from Sochaux keeping the scores level.

First Cavani forced Pele into a spectacular stop with a curling effort from distance, before Faussurier saved the day again from the resulting corner as he kept out Lucas Moura's far-post header.

But the deadlock was finally broken by Cavani in the 25th minute, the Uruguay international displaying superb technique to control Thiago Motta's exquisite ball over the top and volley into the bottom corner.

Blanc's men then spurned a clear opportunity to double their lead, Ezequiel Lavezzi volleying over the bar after pouncing on some sloppy Sochaux defending.

Herve Renard's side rarely threatened the PSG goal during the opening period, however, they should have drawn level on the stroke of half-time, only for Salvatore Sirigu to keep out Sebastien Roudet's close-range effort.

Just over 10 minutes into the second half Sochaux did level, though, Sirigu palming Florian Marange's deflected left-wing cross off PSG captain Thiago Silva and into the net after Sebastien Corchia had gone close for the hosts.

PSG almost restored their advantage five minutes later, Cavani working his way into the box only to be thwarted by another fine stop from Pele, who then denied substitute Marco Verratti from point-blank range.

Both teams pressed to try and find a winner in the closing stages, but were left to settle for a point that moves Sochaux within four of safety - though time is running out for them - and keeps PSG's title party on hold.