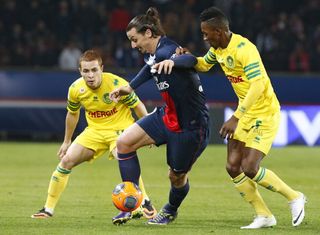 Laurent Blanc's side were never troubled on Sunday evening and went ahead in the 10th minute through a Thiago Silva tap-in.

Ibrahimovic added a first-half penalty and rounded the scoring off after further goals from Thiago Motta and Edinson Cavani.

PSG have won four of their last five league games and remain on course to retain the title.

Second-placed Monaco got back on track by defeating Toulouse 2-0.

After two games without a win, Claudio Ranieri's side moved in front after 36 minutes through Layvin Kurzawa's third goal in four league games.

Meanwhile, Lyon made it six games unbeaten with a 2-0 win at Reims, who tasted defeat in the league for the first time since November.

Alexandre Lacazette bagged his 10th of the Ligue 1 season after 25 minutes and a Gueida Fofana strike - his first of the campaign - six minutes from time made the game safe.