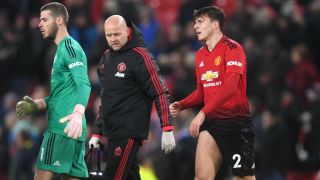 Victor Lindelof's decision to continue playing despite being visibly injured during Manchester United's 0-0 draw with Crystal Palace proves Jose Mourinho's team is playing with desire, according to Roy Hodgson.

United produced another tepid display at Old Trafford on Saturday and were arguably fortunate to take a point against a Palace side who had lost their previous three games across all competitions.

The result leaves United trailing pacesetters Manchester City by 14 points after just 13 matches in an underwhelming start to the campaign.

United's form has seen fans, pundits and even Mourinho question the team's motivation, but Hodgson pinpointed Lindelof as proof to the contrary, battling on with a knock after the hosts had made all three substitutions.

Late in the game, the Sweden centre-back – who was noticeably limping due to injury – kept pace with Wilfried Zaha, before then nonchalantly dribbling out from defence, and Hodgson applauded him.

Read Jose's post-match quotes in our official app, including more on 's performance and injury.November 24, 2018

"If anyone doubts anything about Manchester United and commitment and desire, to see Lindelof, who had obviously injured himself, actually keeping pace with Zaha and [Jordan] Ayew, that would tell you more," Hodgson told reporters.

"If I was a Man United man, that would be one of the most impressive things that happened in the game as far as I'm concerned.

"It would give me a lot of satisfaction knowing that, not only are there good players here who can cause so many problems for opponents, you've even got that level of spirit and determination and guts when it comes down to it.

"He could quite easily have used the injury as an excuse, and Wilf and Jordan, who are very quick, could have gone past him and maybe even won the game."