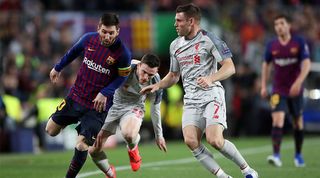 Lionel Messi is no fan of James Milner. After the first leg of the Champions League semi-final, Milner revealed that Messi called him a donkey when they were going down the tunnel.

In an interview with the Mail, he said: “He was giving me plenty in Spanish going down the tunnel at half-time as well. He was calling me ‘burro’. It translates as donkey but I think it’s also used in Spanish football as a general term for someone who goes around kicking people.

“I asked him if he was all right, but he wasn’t having it. I don’t think he realised I understood his Spanish. He said: “That foul you did, that’s because I nutmegged you”.

Of course, Milner went on to have the last laugh, with Liverpool winning the return leg 4-0, knocking Barcelona out of the competition in the process.

The result was so difficult to take for Messi that he claimed it was worse than losing the World Cup Final against Germany back in 2014. He said: “Both games were very big shocks – but losing to Liverpool hurt more because we just did not expect it.”

And the nutmeg in question? That came when Milner was playing for Man City in the Champions League in 2015. Always worth watching again, even if we won't see it in the final.

Ernesto Valverde does not believe Liverpool defeat is haunting Barcelona