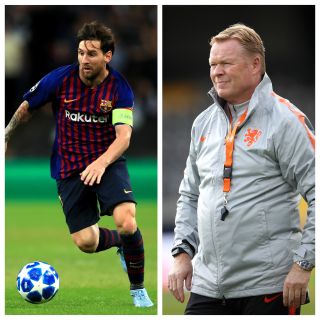 Lionel Messi will be the lynchpin of a Barcelona side coached by Ronald Koeman next season, the club’s president Josep Maria Bartomeu has said.

Bartomeu ruled out the possibility of the Argentinian star – out of contract next summer – leaving the Nou Camp as he confirmed their intention to appoint Koeman as the successor to Quique Setien, though that deal is not yet finalised.

“I have spoken with Koeman and the pillar of our project is Messi,” Bartomeu said. “He has a contract until 2021, I speak a lot with Leo and more regularly with his father.

🔊 @jmbartomeu: "If nothing goes wrong, Koeman will be Barça's head coach next season. We already know how he thinks and his philosophy" pic.twitter.com/5CZHKBi597— FC Barcelona (@FCBarcelona) August 18, 2020

“He is number one in the world. There is no doubt that in Koeman’s new project you can count on Messi.”

Messi has been synonymous with Barca for more than a decade, scoring 631 goals in 734 appearances since breaking into the first team in 2005, helping the club win four Champions League crowns, 10 LaLiga titles and many other trophies besides.

But his future had come into question in the wake of Friday’s stunning 8-2 Champions League defeat to Bayern Munich which appeared to leave nobody safe at the club.

Setien, only in charge since January, was sacked on Monday, and a day later sporting director Eric Abidal left the club too, though Bartomeu indicated the former defender had jumped rather than been pushed, saying it was his “personal decision”.

Bartomeu has himself come under intense scrutiny, but rather than resign or face an immediate election he has chosen to bring forward the club’s next ballot to March next year.

By then, he will hope Koeman has done much to ease the extreme pressure on the club’s board.

“We bet on him,” Bartomeu said. “He has been in (Johan) Cruyff’s ‘Dream Team’. He was the first one we called in January. It’s a dream for him.”

Koeman played for the club between 1989 and 1995, winning the European Cup, four LaLiga titles and the Copa del Rey.

Though contracted with the Dutch national team until after the 2022 World Cup, Koeman earlier on Tuesday confirmed his interest in the Barca job as the 57-year-old said “I’d like to, but it will only be confirmed once I have signed the contract.”

The deal is not yet done, with Bartomeu saying only that Koeman would be the coach “if nothing goes wrong”, though with all parties in agreement that appears a foregone conclusion now.

The questions will instead be about what other changes lie in store, with Bartomeu indicating a full squad overhaul was on the cards.

“The renewal will be as deep as necessary,” he said. “It was I who decided to give this generation the opportunity for another year. Maybe it was time to start the renovation last year.”

Bartomeu is willing to take the blame for the position Barca find themselves in even if he has no intention of walking, saying: “We are all responsible, but I am the most responsible.

“The easiest thing would be to resign but I am not doing it because of my responsibility to the club,” he added.

With Koeman on the verge of leaving the Holland job there were reports that Arsene Wenger had been in touch with the KNVB to offer his services, but the ex-Arsenal boss denied that on Tuesday evening.

Wenger, who now works as FIFA’s chief of global football development, told beIN Sports: “I am not available. I didn’t speak to anybody…I don’t know where that came from – certainly not from me.”