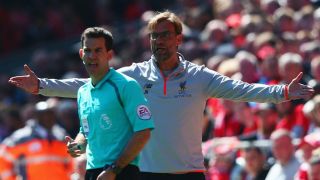 Liverpool left their Champions League qualification hopes in the balance as James Milner had a second-half penalty saved in a forgettable 0-0 draw against Southampton at Anfield.

Jurgen Klopp's side did little to trouble an amply stocked and well-drilled Saints defence until Jack Stephens was penalised for handball in the 64th minute.

Milner headed into the match having converted seven spot-kicks from seven this season, but he was unable to preserve his perfect record as Fraser Forster saved brilliantly.

The otherwise uneventful stalemate edged Liverpool up to third with two games to play, but Manchester City are one point in arrears with a game in hand.

Manchester United were five points worse off in fifth before facing Arsenal later on Sunday, the first of four remaining league games for Jose Mourinho's men this term – meaning Liverpool's top-four fate was, at least temporarily, out of their hands.

Southampton moved up to 10th, ahead of Bournemouth and West Ham on goal difference, with their boss Claude Puel extending an unbeaten career record against Liverpool to six matches.

1 - James Milner has failed to score a Premier League penalty for the first time since November 2009 for Aston Villa vs Bolton. Denied.May 7, 2017

Forster gathered a Georginio Wijnaldum header and Roberto Firmino had a shot blocked by Maya Yoshida as the Liverpool attack probed at a deep-lying Southampton defence during the opening stages.

Philippe Coutinho – fit to start after sustaining a dead leg at Watford last time out – drilled a stinging strike at the Southampton keeper, but the sight of Klopp angrily spilling water on himself after Lucas Leiva was penalised for a foul on Dusan Tadic amounted to the most entertaining action as the half-hour mark passed.

Liverpool were unable to turn their dominance of possession into anything approaching a clear chance as Southampton finished the half without registering a single shot.

That remained the case as the hour passed, with Liverpool providing little more inspiration until Stephens handled when the ball looped up off Divock Origi.

Referee Robert Madley had little hesitation in pointing to the spot and Southampton had Cedric Soares and James Ward-Prowse booked for dissent and delaying the penalty respectively, while Forster made sure to share a few thoughts with Milner.

Those words seemingly paid dividends as the England international sprung brilliantly to his right to save a well-struck kick – Milner's first unsuccessful Premier League penalty for seven and a half years.

Klopp responded by sending on Daniel Sturridge and ex-Saints favourite Adam Lallana in search of badly lacking inspiration, but, on an afternoon of precious little encouragement from open play, it was hard to escape the sense their best opportunity had passed.

The two substitutes combined in the 79th minute, with Sturridge brilliantly shimmying past Stephens, but he was unable to direct his shot far enough away from the ever-imposing Forster.

In Sturridge, Liverpool at least had an effective attacking focal point and the England striker curled a low shot against the back stanchion.

Another Reds replacement, the largely forgotten Marko Grujic, almost snatched the points with an injury-time header, but – to conclude a theme – Forster saved brilliantly.