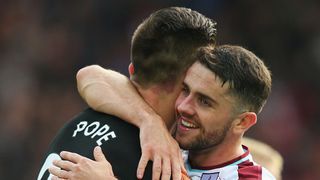 Burnley continued to defy the odds on the road with a 1-1 draw at Liverpool as Philippe Coutinho's Premier League return ended in disappointment.

Sean Dyche's side were woeful away from Turf Moor last season, winning only one top-flight game, but this term they have won at Chelsea and drawn at Tottenham.

History weighed heavily against them at Anfield on Saturday, with the Clarets having won only once on their previous 23 visits in all competitions.

But Scott Arfield opened the scoring completely against the run of play 27 minutes in to offer a hint of what was to come and they held on even after the hosts quickly gathered themselves to level through Mohamed Salah.

Jurgen Klopp recalled Coutinho to the starting line-up, marking the Brazilian's return to league action following his transfer request last month amid a series of bids from Barcelona, and the Reds dominated, but goalkeeper Nick Pope played a key part in the visitors' resilient rear-guard action.

After Ben Mee had a header cleared off the line by Joel Matip late on, substitute Dominic Solanke hit the crossbar from just a few yards out as Liverpool – who were held in midweek by Sevilla in the Champions League – were frustrated again.

Liverpool made all the early running, with Trent Alexander-Arnold dragging an effort wide and seeing a teasing cross blocked by Robbie Brady.

Salah had optimistic appeals for a penalty waved away after tumbling inside the box under pressure from James Tarkowski, with the Egypt international also heading over the crossbar from a tight angle.

As the hosts continuing to build up a head of steam, it seemed only a matter of time before the deadlock was broken and that proved the case, but not in the way anyone had anticipated.

Tarkowski's diagonal ball was headed across the edge of the box by Brady, helped by a slight touch from Chris Wood on its way, and the unmarked Arfield capitalised on some slapdash defending to calmly steer home the opener.

Liverpool's response was swift and decisive, with Salah collecting Emre Can's lofted pass and finding a way past Pope from inside the box just three minutes later.

Klopp's side should have gone in ahead at the break, but James Milner's cross just eluded Daniel Sturridge as he raced into the six-yard box.

The second half picked up were the first had left off, with Liverpool probing and Burnley trying to contain them.

Coutinho flashed a long-range attempt over the crossbar, while Pope escaped unpunished after spilling Can's low drive before producing a fine stop from Sturridge's strike.

A timely intervention from Tarkowski thwarted Milner as he looked to volley goalwards, with the visitors looking increasingly stretched at the back.

Incredibly, Mee could have put Burnley ahead again in the final 10 minutes, but his looping header was nodded over the bar by Matip, with Simon Mignolet beaten.

The off-colour Coutinho was replaced by Solanke late on and the substitute could have turned one point into three, but he contrived to hit the woodwork with the goal gaping.