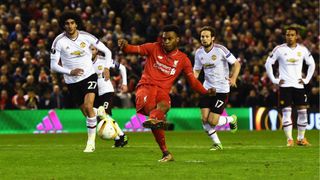 Liverpool claimed a 2-0 advantage over rivals Manchester United in the first leg of their Europa League last-16 tie, with Louis van Gaal's visitors indebted to goalkeeper David de Gea for preventing a heavier loss at Anfield.

Daniel Sturridge converted a 20th-minute penalty after Memphis Depay was adjudged to have fouled Nathaniel Clyne and the industrious Roberto Firmino added a second 17 minutes from time.

Jurgen Klopp's maiden managerial victory in a fixture he referred to as "the mother of all games" and Liverpool's first win over United in five attempts would have been by a greater margin but for De Gea, who came out on top as Philippe Coutinho and Sturridge lacked conviction from close range.

Coutinho then prompted further acrobatics from De Gea, although the Spain international was helpless when Firmino netted Adam Lallana's cutback to score for a third consecutive match.

As both sides sit outside the Premier League's top four, the Europa League provides a valuable alternative route into next season's Champions League, and it is United who find themselves woefully off course after this famous fixture hit the European stage for the first time.

United might have stuck after 16 seconds but Marcus Rashford could not adjust his footing when Depay's cross evaded Alberto Moreno and struck the teenage forward on the knee.

Referee Carlos Velasco Carballo entered the contest with a reputation as a strict disciplinarian, due to 74 yellow cards and six reds in his past 12 matches, and Liverpool captain Jordan Henderson earned a second-minute booking for a challenge on Morgan Schneiderlin.

The Spanish official punished a grappling Depay for finding himself the wrong side of Clyne just inside the area in the 19th minute and Sturridge - back in the side for the first time since Liverpool's penalty shoot-out loss to Manchester City in the League Cup final – made no mistake from the spot.

De Gea guessed correctly, but was unable to keep the kick out and the United goalkeeper excelled himself by denying Coutinho and Sturridge at close quarters – the latter opportunity coming as Chris Smalling woefully missed a defensive header.

And De Gea added to his fine catalogue of work when Lallana volleyed Firmino's right-wing cross goalwards at the near post, three minutes before a half-time whistle United needed more than their hosts.

Rashford, largely ineffective in a right-sided attacking role, was replaced by Michael Carrick at the break as Van Gaal switched to a back three and United applied pressure after the restart.

But De Gea was called upon once more in the 53rd minute as Coutinho teed himself up to lash a 25-yard strike towards the top corner when the United number one's fingertips intervened.

Clyne drew a punched save from De Gea before the latter watched Henderson slash wastefully over.

But United's early second-half verve had all but vanished by the time Carrick botched a clearance from Henderson's cross, sending the ball into Lallana's path.

Lallana and Firmino would make no mistake and Van Gaal's subsequent introduction of Ander Herrera and Bastian Schweinsteiger felt like too little, too late.

Marouane Fellaini, who pushed his luck more than most after entering Carballo's book, including an apparent late elbow on Emre Can, sent an 85th-minute header wide, but United will need to complete a stunning turnaround at Old Trafford next week.