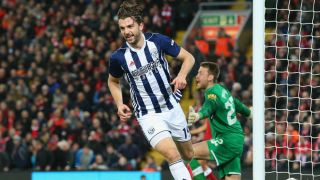 Liverpool have been dumped out of the FA Cup following a 3-2 fourth-round defeat to West Brom at Anfield, in which VAR played a central role.

Jurgen Klopp's side saw an early lead overturned in the first 11 minutes, with Jay Rodriguez scoring twice after Roberto Firmino's opener, and the visitors netted for a third time through Craig Dawson only for a referral to the video assistant referee to rule out the goal.

Liverpool were awarded a penalty after another VAR review three minutes later, but Firmino missed from the spot, and Joel Matip's own goal just before the interval ultimately proved decisive despite a second-half Mohamed Salah strike.

The Reds saw an 18-match unbeaten run in all competitions ended by Premier League bottom club Swansea City on Monday and they looked to be on track to make amends for that loss when Firmino broke the deadlock in style five minutes in.

Rodriguez turned the game on its head with two quickfire finishes, though, before the frantic few minutes involving video technology resulted in West Brom hanging onto their lead.

Amid the delays in play which will no doubt prove a talking point, Liverpool were evidently well short of the form that saw them beat Manchester City two weeks ago, and Matip's unfortunate own goal came after more slack defending in front of the Kop.

Klopp's men had plenty of the ball in the second period and Salah gave them some hope 12 minutes from time, but West Brom held on for a first win in 10 against the Merseysiders and a place in round five.

3 - West Brom are the first away team to score three first half goals at Anfield since Real Madrid in October 2014. Galacticos. January 27, 2018

Jonny Evans was perhaps a surprise starter given the speculation concerning Arsenal, and the uncertainty over his future seemed to impact his decision-making on the pitch early on.

The centre-back waited for Ben Foster to come out for a loose ball and Salah stole in front of him, and although Foster saved his effort, Firmino followed up with a sublime lob into the unguarded net.

Liverpool's lead lasted little more than a minute, though. Chris Brunt won back possession from Georginio Wijnaldum 30 yards from goal and found Rodriguez, who drove into space before lashing the ball into the top-right corner of Simon Mignolet's net.

71 - There were just 71 seconds between Liverpool taking the lead and West Brom equalising at Anfield. Rapid.January 27, 2018

With just over 10 minutes played, Rodriguez had his second. Grzegorz Krychowiak worked some space outside the Liverpool box and slipped the ball to Kieran Gibbs, and his low cross was side-footed home by the former Southampton man, with the home defenders static.

Then came the dramatic period involving VAR. First, Dawson's header from Brunt's corner was ruled out after a consultation with the video referee, who appeared to deem Gareth Barry was interfering with play from an offside position as he tried to help the ball into the net.

Liverpool were then given the chance to equalise from the spot when referee Craig Pawson penalised Jake Livermore for a tug on Salah's shirt after reviewing the footage, but Firmino crashed his effort off the crossbar.

The Reds were undone by more slack defending in first-half stoppage time. Dawson collected the ball in behind the back four following a free-kick and scuffed a half-volley across goal that was inadvertently turned in by Matip.

Pawson again reviewed the decision, seemingly to check for any offside, but replays showed the goal was fair and it was allowed to stand.

A buoyant West Brom threatened again early in the second half and Dawson once more nodded a loose ball into the net following a set-piece, although the officials rightly ruled it out for offside despite chants of 'VAR, VAR' from the nearby visiting fans.

Foster saved well from James Milner and Salah gave Liverpool some late hope with a cool finish from 12 yards after West Brom failed to clear, but the visitors held firm for a win that continues their improved form under Alan Pardew.