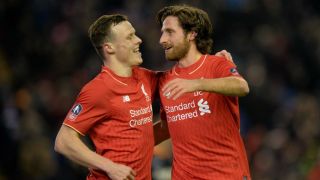 Liverpool eased to a 3-0 win to see off Exeter City at the second attempt and set up an all-Premier League clash with West Ham in the fourth round of the FA Cup.

Joe Allen's 10th-minute tap-in calmed any early nerves at Anfield on Wednesday, and although the hosts had to wait for further reward for their dominance, substitute Sheyi Ojo's curling effort after 74 minutes sealed their progress.

Joao Carlos Teixeira added further gloss to the scoreline with a calm finish with nine minutes to go, although the biggest cheer of the night was reserved for the return of Jon Flanagan.

The Liverpool full-back, finally fit after battling back from a serious knee injury, came on as a 51st-minute substitute to make his first appearance for the club since May 2014.

League Two outfit Exeter - who valiantly held Liverpool to a 2-2 draw in the original third-round tie at St James Park - battled bravely but rarely threatened to become the first side from the fourth tier to knock their illustrious opponents out of the competition.

Liverpool manager Jurgen Klopp once again rested the vast majority of his first-team squad, although Allen, Ibe and Simon Mignolet were all included in the starting XI having sat out the draw in Devon on January 8.

Allen broke the deadlock after 10 minutes, slotting home from close range after Brad Smith had cut the ball back from the left byline.

Christian Benteke - who captained the Premier League side at St James Park but saw Jose Enrique handed the armband for the replay - twice failed to find the target with close-range headers before the break.

Ibe, meanwhile, forced a pair of saves out of Bobby Olejnik with shots from outside the area, while Cameron Brannagan was also denied by the Exeter goalkeeper after having a go from distance.

Flanagan's introduction early in the second half delighted the home fans, and the Anfield faithful were on their feet again when Ibe's left-footed drive struck the cross bar and bounced down, but the whole ball had failed to cross the line before bouncing out to safety.

Olejnik kept his side in the contest by bravely diving at the struggling Benteke's feet on the hour mark, yet the underdogs never had enough bite to threaten an equaliser in front of their raucous travelling support.

Teenage winger Ojo - who had replaced scorer Allen - finally put the game to bed when he was given too much room to pick his spot superbly from the right-hand side of the penalty area, before good work from Benteke set up the chance for Teixeira to score in front of the Kop.