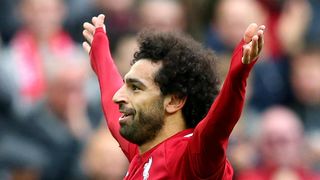 Mohamed Salah broke a three-game goalless run for Liverpool as they brushed Southampton aside 3-0 at Anfield to win their opening six games for the first time in a Premier League season.

After Roberto Firmino's last-gasp strike against Paris Saint-Germain in the Champions League, Liverpool have won all seven matches in a flying start to 2018-19 that leaves them two points clear of champions Manchester City.

Xherdan Shaqiri's shot deflected in off Wesley Hoedt for an early opener, with Joel Matip then heading in his first Anfield goal for Liverpool in a comfortable first half for Jurgen Klopp's side

And the points were sealed shortly before the break when Salah tapped in after Shaqiri's free-kick hit the woodwork, although Virgil van Dijk's injury after the break marred the win for Klopp.

Shaqiri was making his first Liverpool start and the Switzerland star was involved in the opening goal in the 10th minute.

After a corner was cleared, Sadio Mane threaded a pass through to Shaqiri on the left wing and after he cut inside to shoot, his effort deflected in off first Shane Long and then Hoedt.

The lead was soon doubled, Matip rising at the back post to head home a right-wing Trent Alexander-Arnold corner won when Cedric Soares made a brilliant challenge to deny Salah.

Salah's form had been questioned in a rare dry spell but he poked in the third from point-blank range after Shaqiri's free-kick crashed against the underside of the crossbar.

Van Dijk was substituted shortly after the break, the world's most expensive defender holding his ribs, with Liverpool seemingly settling for three goals in a low-tempo second period, although Salah was denied a late second by the offside flag.

It may be too early to talk about title races but Liverpool's form is ominous. A seventh straight win in all competitions has shown their development from last term, but two meetings with Chelsea within the next week will offer a better indication of their progress than Southampton, who offered little. They are entrenched in the bottom half and will need to perform better than this flat showing to avoid a relegation battle.

A home game with Southampton was the ideal opportunity to hand Shaqiri his first start and he thrived in a lively opening 45 minutes. Involvement in two goals from a number 10 role showed the versatile former Stoke City man can be an asset for Liverpool, especially in the latter stages of the season when games mount up. Fans will hope his withdrawal at half-time was not due to injury.

Hughes tactics give Saints no hope

Southampton contrived to throw away a two-goal lead at home to Brighton and Hove Albion on Monday but their tactical plan at Anfield gave them little chance of getting even a point. Selecting Shane Long - who has scored twice since the start of last season - as a lone striker was a strange call from Mark Hughes when he had Charlie Austin on the bench. Southampton have failed to score in five Premier League games against Liverpool and they hardly created a chance, although not being able to pick in-form on-loan Liverpool striker Danny Ings restricted Hughes' attacking options.

Liverpool host Chelsea in the EFL Cup third round before seeking to extend their winning Premier League run against the same opposition at Stamford Bridge on Saturday - the same day the Saints travel to Wolves.