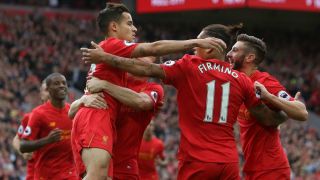 Liverpool made it four wins in a row in all competitions with a comfortable 5-1 Premier League victory over 10-man Hull City on Saturday.

Goals from Adam Lallana, James Milner and Sadio Mane and a stunning Philippe Coutinho strike were enough to see off Mike Phelan's side, who played for more than an hour at Anfield with depleted ranks after Ahmed Elmohamady was dismissed.

Liverpool, who followed up their 2-1 win at Chelsea with a 3-0 EFL Cup victory at Derby County this week, made their most of some early dominance when Lallana steered in Coutinho's pass after 17 minutes.

Hull suffered a 4-1 loss to Arsenal in their last league game, in which Jake Livermore was sent off for a handball, and it was a painful case of deja vu when referee Andre Marriner issued Elmohamady a straight red card for blocking Coutinho's shot near the goalline with his arm.

Milner tucked away the penalty before Mane's crisp finish made it 3-0, and though David Meyler grabbed a lifeline early in the second half, Coutinho struck almost immediately afterwards to restore Liverpool's three-goal advantage.

Jurgen Klopp's side capped a dominant display after Daniel Sturridge won a dubious penalty, allowing Milner to dispatch his second spot-kick of the match and move Liverpool above rivals Everton in the top four on goal difference.

The hosts were in charge from the off and got the goal they deserved after 17 minutes. Coutinho surged into space and fed Lallana in the penalty area, who showed clever control to steady himself before dragging a low shot back across goal and into the bottom-right corner.

Any hope of a Hull recovery looked to be lost when Elmohamady was sent off after blocking Coutinho's goal-bound shot with his arm just in front of the line, allowing Milner to sweep his penalty low past David Marshall's despairing dive.

Mane's deflected shot rattled the top of Hull's crossbar before he steered an effort narrowly over from the middle of the box, and Georginio Wijnaldum was denied from distance by Marshall as Liverpool's pressure showed no sign of abating.

But Marshall could do nothing to stop Mane making it 3-0, as Hull's defence allowed the former Southampton man to control Lallana's pass and turn before firing into the bottom corner from 18 yards.

Hull fans sensed a miraculous comeback when Meyler - with his side's first shot of the match - drilled low past league debutant Loris Karius after Liverpool failed to clear a corner six minutes into the second half.

That hope lasted barely 60 seconds, however, as Coutinho worked some space 25 yards from goal before rifling a shot beyond the reach of Marshall and into the top corner.

Klopp brought on Sturridge and he made a quick impact, skipping into the Hull box before going to ground under minimal contact from Andrew Robertson, allowing Milner to slot home his second penalty of the day and seal another emphatic victory.