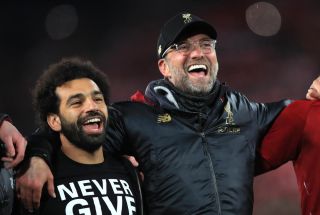 Jurgen Klopp will manage in an eighth major final after Liverpool’s remarkable comeback to beat Barcelona at Anfield on Tuesday.

It will be Liverpool’s second successive appearance in the Champions League showpiece and Klopp will hope the clash with either Tottenham or Ajax can end his losing run in finals.

Klopp’s Dortmund side completed the league and cup double with a goal-laden victory over Bayern Munich in the German cup final. Robert Lewandowski was the star of the show with a hat-trick, while Shinji Kagawa and Mats Hummels scored Dortmund’s other goals.

The following season ended with a replay in the Champions League final but this time it was Bayern who took revenge at Wembley. Ilkay Gundogan’s penalty had cancelled out Mario Mandzukic’s opener but Arjen Robben scored the winner at the death.

Klopp’s third final again pitted Dortmund against Bayern, and once again a tight encounter went the way of the Munich giants. It was goalless after 90 minutes but Robben and Thomas Muller scored in extra-time.

Klopp’s final season at Dortmund had an unhappy ending with another cup final defeat, this time to Wolfsburg. Pierre-Emerick Aubameyang gave Dortmund the lead early on but Wolfsburg scored three times before half-time through Luis Gustavo, Kevin De Bruyne and Bas Dost.

Klopp’s first season at Anfield brought a trip to Wembley to face Manchester City but there was no change in his final fortunes. Philippe Coutinho struck late in normal time to cancel out Fernandinho’s opener but Coutinho, Lucas Leiva and Adam Lallana all missed in the penalty shoot-out.

After beating Manchester United and his old club Dortmund, Klopp guided Liverpool to his second European final. Daniel Sturridge put the Reds in front against Sevilla but the Spanish side equalised just after the break through Kevin Gameiro and Coke scored twice to turn the game around.

Loris Karius and Gareth Bale were the central figures in another final loss for Klopp. After a goalless first half, Karius threw the ball against Karim Benzema for an opener that was quickly cancelled out by Sadio Mane. Bale came on as a substitute and scored a spectacular overhead kick before clinching victory with a long-range effort that went through Karius.