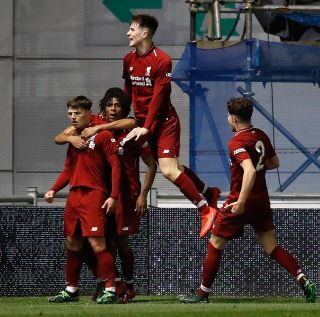 Steven Gerrard’s cousin left City after seven years in acrimonious circumstances in 2018 having refused to sign a new contract in order to secure a move back to his home town.

Liverpool snapped him up for about £200,000 and he repaid that with a late long-range strike reminiscent of his famous relative to make it 1-1 and force extra time, although he was assisted hugely by City goalkeeper Louie Moulden’s howler in letting the ball slip through his hands.

The 17-year-old celebrated in front of home fans at the City Football Academy with his hand to his ear.

It was his 32nd goal of the season and the 60th scored by him and his strike partner Paul Glatzel, who barely had a chance all night.

Extra time produced no further goals and in the shoot-out City’s Cole Palmer hit the crossbar – the only player to fail – as Liverpool claimed a 5-3 victory, with Glatzel ramming home the winning spot-kick.

With Pep Guardiola watching, City dominated possession in the first half but had only Spanish youth international Nabil Touaizi’s added-time goal to show for their efforts.

The tables were turned after the break as Liverpool had the lion’s share of the ball but City should have scored more with the number of counter-attacks they had.

Liverpool’s front two of Duncan and Glatzel barely had a chance until Moulden’s error.

The City keeper, who had escaped with a couple of misplaced passes inside his own penalty area, inexplicably allowed Duncan’s 25-yard, head-high drive to slip through his fingers four minutes from time.

Penalties ensued and Liverpool, whose senior side are battling Guardiola’s City for the Premier League title, lifted the cup for a fourth time.