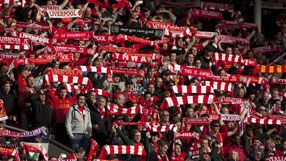 The redevelopment would cost around £150 million and the announcement brings to an end the decade-long saga of whether the club would leave the only ground that has been its home since Everton moved out in 1892.

Liverpool City Council and the club unveiled the plans for the regeneration of the stadium and the surrounding area with work expected to start in 2014.

The announcement came on the second anniversary of the Fenway Sports Group (FSG) acquisition of the club and was made at a news conference at Liverpool Town Hall.

"Today represents a huge step forward for the Anfield area. Everyone at the football club knows the importance of today," said the club's manager director Ian Ayre.

"Liverpool celebrated its 120th year in 2012 at Anfield and there is no doubt it is the spiritual home of the club - our preference was always to remain at Anfield."

The expansion, which would increase Anfield's capacity from its current 45,500, would mean the demolition of some houses near the ground with a large part of the surrounding area subject to huge regeneration plans.

"This is a major step forward for the football club but more importantly the residents. This is step one as there is land to acquire, plans to be approved etcetera, but this is a significant moment," Ayre added.

"Questions about capacity and cost are not for today - not until we have certainty."

FSG also rejuvenated Fenway Park, home of the Boston Red Sox, and Ayre said it made little financial sense to invest over 300 million pounds in a new stadium only for an increased capacity of around 15,000.

"If you build a new stadium, for example, one of the big challenges is that you don't get 60,000 new seats in a new stadium, you only get the difference [with the existing capacity]," Ayre told the club website.

"That makes it very difficult to make it viable because the cost of building such a big new stadium doesn't work economically, particularly in this market.

"We've had some of the greatest triumphs in our history here, so it makes sense if there's a right solution that this is the place we should continue to play our football."