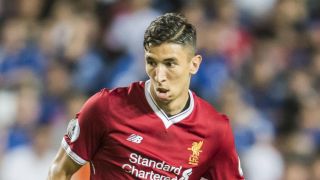 Liverpool midfielder Marko Grujic has joined Cardiff City on a loan deal to the end of the season.

Grujic has been allowed to leave the Anfield club having made three brief substitute appearances in the 2017-18 Premier League.

The Serbia international, who joined Liverpool from Red Star Belgrade in May 2016, will aid Cardiff's efforts to win promotion.

Neil Warnock's men sit third in the Championship, two points outside the automatic promotion spots, and face Premier League leaders Manchester City in the FA Cup fourth round on January 28.

"This is a good opportunity for me, to play in a club that will be fighting until the end to get in to the Premier League," said Grujic.

"To work with a manager like Neil Warnock is something I'm looking forward to. I've heard good things about him and when he spoke to me he said some good things about me and that I had a chance to play as part of his squad."