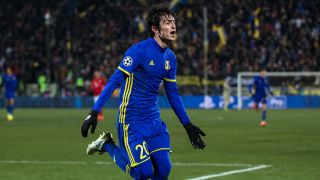 Rostov forward Sardar Azmoun says it would have been wrong to join Liverpool in the January transfer window.

The 22-year-old was heavily linked with a move to Anfield following impressive performances in the Champions League group stage against Bayern Munich and Atletico Madrid.

However, the Iran international feels he would have been restricted to a bit-part role once Sadio Mane returned from the Africa Cup of Nations and other players recovered full fitness.

"There were talks of Liverpool having expressed an interest in me during the past winter transfer window," he told the website for the Supreme Committee for Delivery and Legacy of the 2022 World Cup in Qatar.

"However, I did not feel the time to move was right. I would have ended up playing a few games and then spent a great deal of time on the bench as Liverpool were only looking to fill a void for a particular part of their season."

Azmoun, dubbed 'The Iranian Messi' in some quarters following his performances for the national team and Rostov, says he expects to join a major side soon.

"I want to move to a big club to develop as a player and therefore I will time the move with great precision," he said. "I am sure I will be playing for a top European club in the near future."

Azmoun is with the Iran squad for 2018 World Cup qualifiers against Qatar and China on March 23 and 28 respectively.