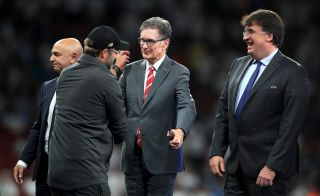 Liverpool’s principal owner John W Henry claims being part of the club’s success in the last 14 months represents a personal peak for him.

Since June 2019 the Reds have won the Champions League, UEFA Super Cup, FIFA Club World Cup and, after a 30-year wait, the league title.

Henry’s Fenway Sports Group also owns baseball franchise Boston Red Sox, who ended their own 86-year trophy drought with a World Series victory in 2004, following up with further wins in 2007, 2013 and 2018.

This was a season for the ages and for the faithful of Liverpool Football Club. It has been an incredible year of magnificent achievement culminating tonight in capturing the Premier League title.— John W. Henry (@John_W_Henry) June 25, 2020

But the American believes what Liverpool have achieved sits above that.

“The fact that we are champions of England, champions of Europe, the Club World Cup, the Super Cup is just an extraordinary accomplishment by this organisation and by these players,” he told liverpoolfc.com.

“Liverpool Football Club is a family and it’s really something extraordinary to be part of.

“I just want to say (to the supporters) that you’ve waited a long time for this and I know we all have to celebrate responsibly, but this really feels sort of like the gift that keeps on giving.

“Every day I get up, it’s front and centre that we won (in) England finally. So, that’s my wish for you, that every morning you get up for the next, as long as you can accomplish it, think about what we accomplished this year in Europe, England and I hope you feel as proud as I do.

“To the staff, to the players, to all of you who expended so much effort over these last two years, I just want to say thank you from all of us at Fenway Sports Group.

“I know you get this from the fans, I don’t know if you get it from us enough but we really appreciate everything you did this year, this last two years. Thank you.”

Midfielder James Milner has warned his team-mates it would be “criminal” for them to lose their focus after one Premier League title triumph.

Form dipped once the title had been secured in June, with two of only three league defeats coming in their final seven matches of the season and their 100 per cent home record also falling in a draw against Burnley.

The players are currently on a three-week break before pre-season begins but Milner, winner of two titles in three years with Manchester City, insists they have to be switched on when they return.

“I think it’s getting that balance right. We have to enjoy it because we know how hard it is to win trophies,” said the 34-year-old.

“We’ve been very good to do it but also lucky to win the amount of trophies we have had this year.

“Trent (Alexander-Arnold) thinks it’s absolutely easy, he just turns up and wins trophies every year, but I can assure you, with the amount of years I’ve had in my career, it’s not that easy.

What a year 🙌🏻🏆Wish we could have shared the celebrations with the fans… hopefully we'll get the chance to do that soon – and give you even more to cheer next season 🔴 #weareliverpool#champ19ns#ynwapic.twitter.com/BlDTdyaMY6— James Milner (@JamesMilner) July 27, 2020

“We have to do our job, get on that field and be even better. If we’re at the level we’re at now next season, it won’t be good enough.”