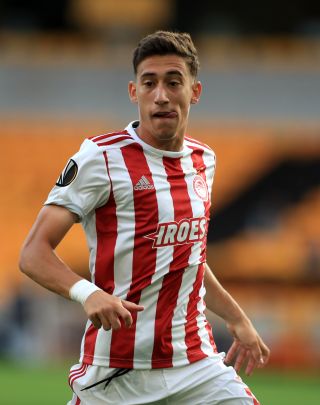 Premier League champions Liverpool have completed the signing of left-back Kostas Tsimikas from Olympiacos for a fee of £11.75million.

The 24-year-old Greece international has moved to Anfield on a five-year contract.

Tsimikas, who featured against Wolves in the Europa League last week, will provide much-needed competition for Andy Robertson on Merseyside.

“I’m very happy, I’m very proud to be here. For me, (it is) the biggest club in the world,” he told the club’s website.

“The league here, I like a lot. I watch it on the TV and it was always one dream I had from when I was a kid to come to play in this league.

“(I want) to achieve (our) goals. To win the league again and also to win the Champions League.”

Tsimikas, capped three times by his country and known to have watched videos of Robertson in an attempt to improve his game, becomes Liverpool’s first signing of the summer.

He made 86 appearances for Olympiacos in all competitions and has also had loan spells with Danish club Esbjerg and Dutch team Willem II.

Reds boss Jurgen Klopp said: “He is a very good footballer with an attitude to win and to compete, and I really like his mentality.

“It fits perfectly with the mood and the desire we have in our dressing room already.

“He has showed already at a young age he can experience football in a different country and do well – and he has been a big part of the success Olympiacos has had to win their title this season and in their European campaigns.”

Nice and Napoli were close to signing Tsimikas but Liverpool had established a long-term relationship with his agent – as far back as August 2018 when he played in a Europa League qualifier at Burnley – and in January 2020 identified him as a viable left-back option.

Leicester and Sevilla, among other clubs, tried to join the race when Liverpool’s interest became public but the player had already made a commitment to the Reds.